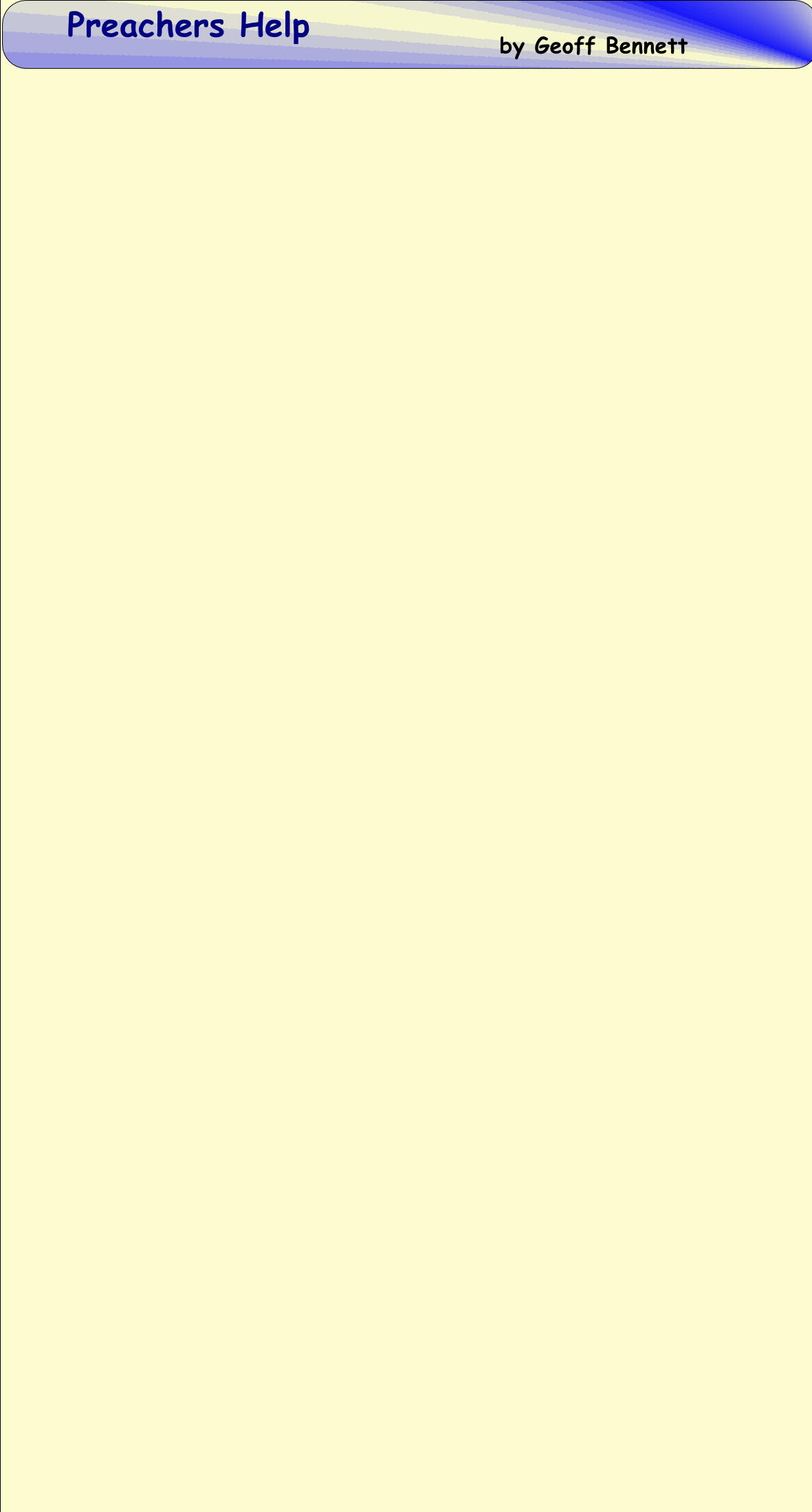 No greater moral change ever passed over a nation than that which passed over England during the years which parted the middle of the reign of Queen Elizabeth 1st from the meeting of the long Parliament. England became the people of the book and that book was the English Bible.

Its literary effects were great - but far greater was the effect of the Bible on the character of the people at large. Someone wrote at the time “The whole temper of the nation felt the change.”

But we are racing ahead. We heard about William Tyndale’s prayer “Lord, open the king of England’s eyes.” The year Tyndale was burnt at the stake in1536 the Lord Chancellor - Thomas Cromwell persuaded King Henry to grant a royal licence for the issue of the Bible in the English language. This was published by a man named John Rogers - who for his troubles was later burnt at the stake by Queen Mary the daughter of King Henry. In 1538 instruction was given to all clergy to have a large volume of the Bible placed in a convenient position in every church so that the reading of the Bible might be made available to all. The Bibles were known as the chained Bible because they were chained to the lectern so no one could steal them. Crowds would stand around listening to a person reading the Bible in English. Up to this time all they had heard - if at all - was the Bible in Latin.

Before we move on I would like to mention one other man who was greatly used by God in Bible translation. His name was Miles Coverdale and he lived from 1488 to 1568. He continued where Tyndale left off by completing the Old Testament. In 1539 he produced the Great Bible.

If you are familiar with the Church of England Prayer Book - the original one - then the Psalms that are in that Prayer Book are the work of Miles Coversale.

There followed quite a number of Bibles. One was known as the Treacle Bible because in Jeremiah 8:22 we have “is there no balm in Gilead?” but this old Bible has “is there no treacle in Gilead?”

King Henry eventually died and his son Edward 6th was crowned at the age of nine.

He was the son of Henry’s third wife Jane Seymour. At his coronation he saw three swords and asked where was the fourth sword - the sword of the Spirit. Whereupon a Bible was presented to Him, and this has happened at every Coronation since. Young Edward was a keen Christian and it was at this time Archbishop Thomas Cranmer wrote the Prayer Book. Sadly Edward died at the age of 16 and the male Tudor line came to an end. His elder sister Mary took the throne and it was a time of persecution of those who loved the Bible.

And interesting little aside - in 1551 Sir Robert Stephens divided the New Testament into verses. (We’ll forgive him for occasionally falling asleep whilst he did it!)

Mary’s half sister Elizabeth was the daughter of Ann Boleyn. Elizabeth learnt the evangelical faith from her mother and as I said as I opened the programme -  a great change came over England at this time. At her public entry into London she held a Bible up to her lips.

Have you heard of the Buggie Bible? In Psalm 91:5 we read “You will not fear the terror by the night.” But this Bible had “Thou shalt not need to be afrayed for any buggies by night.” A Buggie is a body hobgoblin. Some strange superstitions were around at that time.

In 1560 came the Geneva Bible - this was the first Bible to use italics where the reading of the text was uncertain. This Bible was small portable and cheap.

It was known as the Breeches Bible for in Genesis 3:7 we have “They sewed fig leaves together and made themselves breeches.”

As the century turned Good Queen Bess died in 1603. She had no children so the line passed to James 6th of Scotland. His line was through King Henry 8th sister Margaret who married James 4th of Scotland. They had a son James 5th who had Mary Queen of Scots. She had three husbands but James came from her second husband Henry Darnley who was born at Temple Newsam house in Leeds.

As James 6th took up the English throne he became James 1st and the Stuart line began here.

The English language was changing and the people were ready for a new translation of the Bible, so in 1604 the Puritans requested of the King permission for a new translation. 54 translators - some of the best scholars in the land - they were from the High Church through to the Puritans met at Westminster, Oxford and Cambridge. They used Hebrew and Greek texts. The work began in 1606 and was finished in 1611 - so came the Bible we know either as the King James Bible or the Authorised Version. Why not read the introduction - which is most flowery but quite illuminating? On the front page it says Appointed to be read in Churches.

Whilst we call this the Authorised Version what is little known is that King James never signed the document giving the authorisation. But who cared? A Bible came that was to be the only Bible in the English speaking world for the next 300 years. It was rather slow to be accepted over 50 years but eventually it was loved.

It’s beautiful and stately language so endeared itself to the English speaking peoples that no one bothered to have another Bible for a long long time.

In 1739 a Bible was printed by Robert Barker that really got him into trouble. The poor printer had omitted the word ‘Not’ from the 7th commandment so it read “Thou shalt commit adultery!” Then John Baskett, printer produced a Bible which had the word Vinegar instead of Vineyard in Luke 22. It became known as a Baskett full of errors!

So there we are - a brief run down on how the English Bible came to us. It is a fascinating story and we owe a lot to William Tyndale and others who risked and lost their lives in the endeavour to put into the hand of every person a Bible in their own tongue.  It was not until 1866 that many felt a more accurate New Testament was called for because there had been new discoveries in Greek manuscripts.

The three oldest are the Alexandrian thought to date from the 2nd/3rd century that was found at Alexandria in Egypt. This manuscript is not complete. Then there is the Vaticanus as the name suggests this is in the Vatican. This also is not complete there are gaps in the New Testament.

Then there is an interesting story of Constantine Tischendorf. (1815-1874)

He was determined to produce a new Greek text. He worked in the Vatican for 14 days - 3 hours per day but then he overstayed his welcome and had to leave. But he was in St Catherine’s monastery at the foot of Mount Sinai when he saw a monk stoking the fire with parchments which turned out to be parts of the Bible. He rescued 43 manuscripts. Nine years later he was back and found 199 leaves of the Old and New Testament with a few gaps. These were presented to the Tzar and taken to St. Petersburg but later sold to Britain for £300,000 and are now in the British Museum.

HOW THE BIBLE CAME TO US part 4