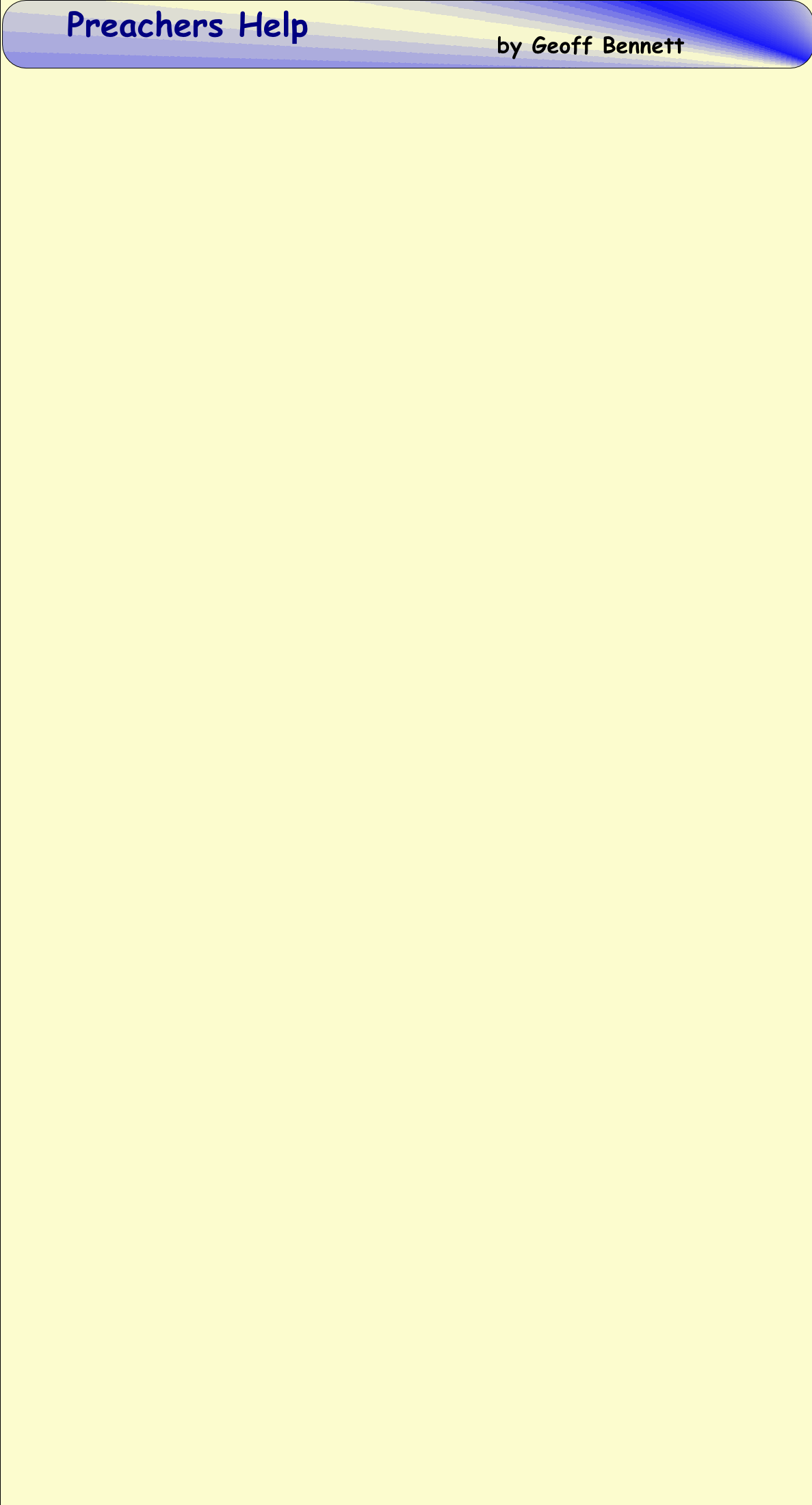 Below is a brief explanation of the key words, given in alphabetical order (apart from the 6 ‘R’s’) This is not exhaustive, for further study I would recommend a good dictionary of Bible words.

The word Canon is from the Hebrew - a reed and the reek - a rod. It came to mean a straight rod and in time - A rule, standard, model, measure norm.

Eventually it was accept as a ‘Rule of Faith.’

In Biblical use it is limited to the 66 books divinely accepted books of the Bible. This is known as the Canon of Scripture. Critical scholars have sought to distinguish God’s Word from erroneous human words, thus they say they have a “Canon within a Canon.”

The Old Testament does not have any direct statement on the manner on which the book obtained their divine authority and canonicity. Church Father’s of the 4th century first used the term Scripture to distinguish them from authoritarian writings of the church. The crystallisation of what we know call the Old Testament was long and complicated. The canon was completed in the time of Ezra c. 450 BC. Josephus the Jewish historian uses the phrases ‘Holy Books’ or ‘Holy Writings.’

The Old Testament is divided into 3 parts

1) The Law, Torah, Pentateuch - The first 5 books of Moses

These books have a normative authority and are valid as the rule for faith and life. The final provision is important for the Christian since since it serves to emphasise the unity of the revelation of BOTH TESTAMENTS.

After the writings were circulated their general acceptance took many years. The first church leader to have all 27 books in a list was Athenasus d. 373 AD Bishop if Alexandria in a church letter written at Easter 367 AD, The final acceptance of the New Testament canon took place at a church council held in Hippo 393 AD and Carthage in 397 AD.Both councils were presided over by Augustine of Hippo.

This term is used for church leaders from the and of the Apostolic era  roughly 100 AD to the beginning of the 4th century. Their writings are of great importance and give us much information about the Apostles and the New Testament.

They are to be used to add extra information about the New testament period but are not to be taken as inspired, which the Bible is.

Despite errors and heresies that have come into the church they are still help full.

1.  ALLEGORY - a narrative describing one subject under the guise of another. A symbolic narrative

3.  MIXED METAPHORS - an expression in which two or more metaphors are confused e.g. “To take up arms against a sea of trouble.”

5.  PARABLE - narrative setting forth something in terms of something else. Fictitious story told to point to a moral. An earthly story                     with a heavenly meaning.

6.  FABLE - a story not based on fact. A narrative in which animals and inanimate objects speak like humans.

8.  PARADOX - the assertion of two propositions as true which seem to be contradictory but may in fact not be.

9.  IRONY - a method of criticising or judging by seeming to praise or congratulate.

10. HYPERBOLE - exaggeration or over statement for emphasis e.g. “I could eat a horse.”

11. SYNECDOCHE - use of the name for a part to refer to the whole, or vice versa e.g. “Fifty sail” to refer to “Fifty ships.”

13. SYILLEPSIS - use of a single word to apply to two others in a different way e.g. “He held his tongue and my hand.”

14. EUPHEMISM - use of an offensive expression to stand in for a sharper or more explicit one e.g. “Passed away” for “dead.”

15. METONYMY - use of a term to refer to some wider idea that it characterises e.g. “The Crown” referring to “The Monarchy.”

According to W.E. Vine the Greek word for gospel is EUANGGLION  this denoted a reward for bringing good tidings. Later the reward was dropped and the word stands for the good tidings themselves. In English we have EVANGEL which is derived from the Greek.

Good News is about the Kingdom of God and salvation (see Salvation) through Christ to be received by faith on the basis of his expiatory work on the cross, His burial and His resurrection and ascension. Acts 15:7; 20:24; 1 Peter 4:17.

The word Euangelion is very much a Christian word. It is used in classical Greek but it is the New Testament that gives it the distinctive meaning of Good News.

So the gospel is the whole Christian message. The New Testament speaks of it a being:-

The above bullet points are from - New Testament Words by William Barclay.

The work of the Holy Spirit in enlightening the mind as you study the Scripture and wait on God to give you a message.

Inspiration is more widely used of the Scriptures themselves - all 66 books. The two proof texts are 2 Timothy 3:15-16 & 2 Peter 1:20-21. It must be stated that both of these passages refer to the Old Testament as the New Testament was still being written. Although I read somewhere of an interesting thought from 2 Timothy 15-16. Verse 15 refers to the “Sacred writings” (ESV) and verse 16 to the “Scriptures.” The sacred writings being the Old testament and the Scriptures being the whole Bible.

The principle of inspiration applies to the whole Bible, so “prophecy” in 2 Peter 1:20-21 applies to both Old and New Testament prophecies.

Up to the publication of the New International Version in 1973, all previous versions had the word “Inspired” in 2 Timothy 2:16. “All Scripture is given by inspiration of God.” The Greek word behind inspiration is THEOPNEUSTOS, made up of two Greek words. THEOS meaning God and Pneustos meaning breath or spirit.

As B.B. Warfield pointed out over 100 years ago - “This word very distinctly does not mean inspired of God.” The English phrase comes from the Latin Vulgate and also John Wycliffe’s translation. The Greek literally means - God breathed.

Let me quote Warfield again - “The Greek word has nothing to say of inspiring about inspiration or of inspiring. It speaks of a “Spiring” or “Spiration.” What it says is not that it is “Breathed into by God” or that it is the product of the Divine “in-breathing” into human authors. But that it is breathed OUT by God.-

When Paul declared then, that “Every Scripture” or “All Scripture” is the product of the Divine breath, is “God breathed,” he asserts with as much enervy as he could employ that Scripture is the product of a specifically Divine operation.” (B.B. Warfield - The Inspiration and Authority of the Bible pp 132-133)

So it is not human authors that were inspired but the Scripture themselves.

Christians who hold that the Bible is God’s Word and is infallible usually call this Plenary and Verbal inspiration. This does not mean mechanical dictation of the words - as many opponents believe. It is not trying to explain “How” but the “Fact.”

The arrow returns you back to your page