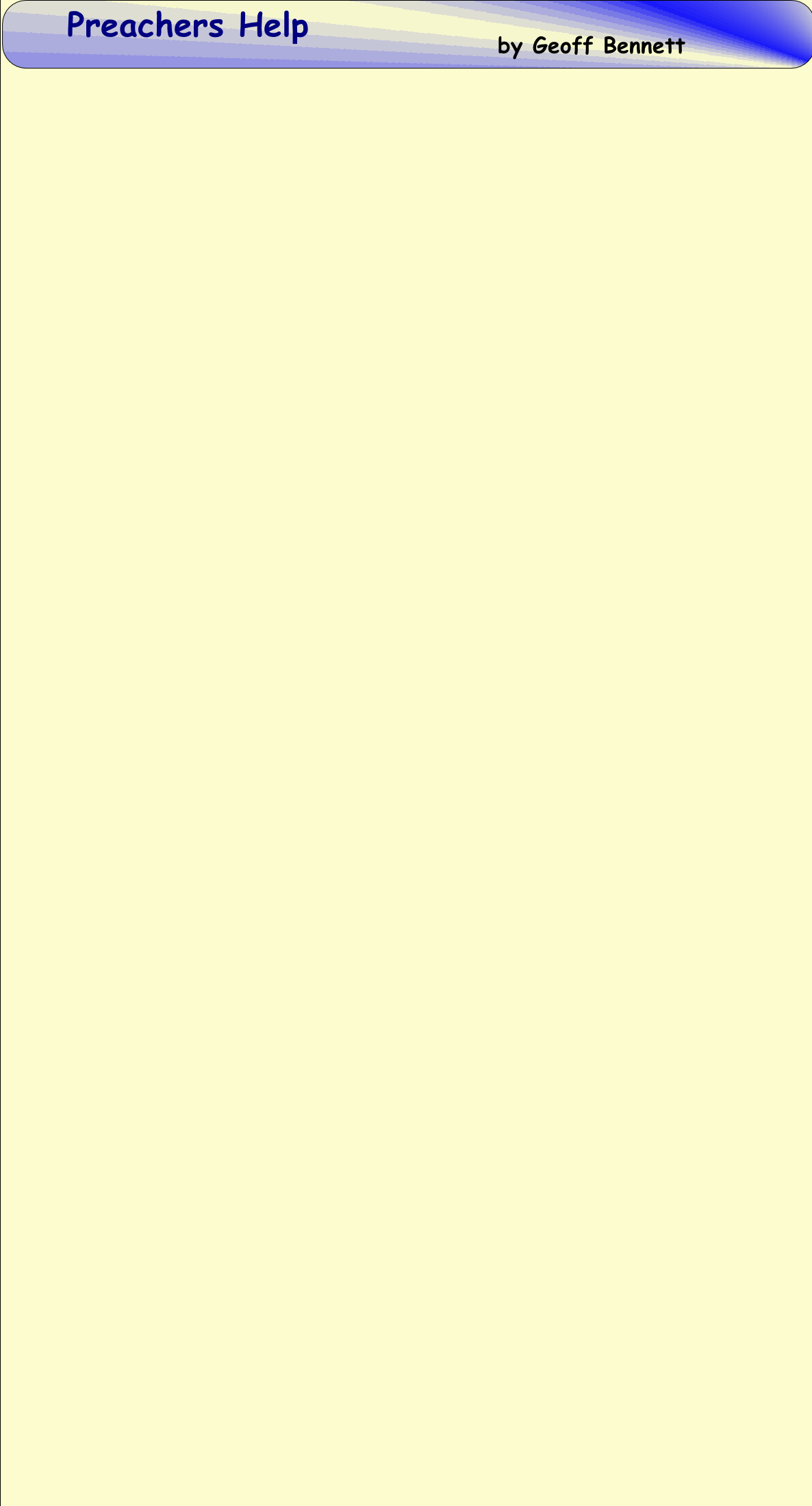 HOW THE BIBLE CAME TO US - by Geoff Bennett

The following are 5 ‘Bible Focus’ radio scripts recorded by Good News Broadcasting and broadcast on various radio stations in the United Kingdom and abroad.

A young Christian, packing his bag for a journey, said to a friend. “I have nearly finished packing. All I have to put in the bag yet are a guide book, a lamp, a mirror, a microscope, a volume of fine poetry, a few biographies, a package of old letters, a book of songs, a sword, a hammer, and a set of books I have been studying.”   Then he placed his Bible in a corner of the suitcase and closed it. All this - and more- is in the Word of God.

It is good to be back with another series of Bible Focus. I wonder if you have ever considered how the Bible came to us. If not I would like in this series to consider this great subject.

As a boy - like many of my age. I was sent to Sunday school and as I listened to some of the teachers they explained that the Bible was passed from father to son by word of mouth. This is what came to be known as the oral tradition. If you have ever played ‘Chinese whispers’ you will know how unreliable that game is. My teacher went on to explain that this was the reason why the Bible is full of mistakes and cannot be trusted.

Well friends, it took me quite some years to realise that my Sunday school teacher was just reading from a book and that what he was teaching was not correct.

This idea that man is above the Bible and knows better than the Bible began many years ago. A chap in Germany called Semler, who died in Halle in 1791, said this “The root of evil in theology is the confusion (or equation) of the Scriptures with the word of God”. Here then is the axiom of those who think they know better than the Bible. Man must decide which parts of the Bible are true and which are not.

Now here is a very penetrating question - how do they know?

We must remember that God is a God of revelation, He chose to reveal himself to mankind and as He did so man began to write down this revelation.

There is very strong evidence that writing had developed and was in use at least 1,000 years before Abraham. He lived about 2,100 before Christ.

When my wife and I were working at the Garden Tomb in Jerusalem we read in the Jerusalem Post an amulet had been found just to the north of the city and was dated around 3,300 BC. The significance is that here was writing on the amulet in an old form of Hebrew.

Writing is thought to have been invented by the Sumarians. Sumeria is mentioned in Genesis 10:10 where it is called the land of Shinar. This is the area we know as Mesopotamia which means the land between the rivers, the rivers being the Tigris and the Euphrates. This is modern day Iraq.

Professor Langdon of Oxford University excavating at Kish a suburb of Babylon unearthed a stone tablet in the form of line pictures dated about 3,300 BC. You know some people think that line picture writing like the ancient Egyptians used is rather primitive and has no use today. Have you ever looked at the Highway Code and seen how many picture drawings there are - our roads of full of them! We read them and think nothing about it.

Certain line picture drawings are very old. They are called Hieroglyphs and were used by the priests in Egypt to write on monuments and tombs of the Pharaohs and leading dignitaries. Then came a more common form called Demotic, used by the man in the street. We know this was in use up to 800 BC.

In Mesopotamia Cuneiform was the writing. This was wedge shaped and pressed into soft clay. The clay around the river Euphrates is very fine and when mixed with water could be made into any shape. The scribe would make it into clay tablets. These were six sided. The scribe would write on it with his wooden wedge. As early at 2,750 BC clay envelopes were used for these tablets. We know there are at least 250,000 cuneiform tablets in museums around the world. Many of them are quite small about 6 cm long that’s about 2 ½ inches. At a place called Ugarit thousands of tablets were found and when they were translated they were found to be shopping lists like - 2 pounds of potatoes, 1 pound of onions, some spring onions etc. Oh yes the ancients could write and they wrote everything down.

But none of those writings mentioned are the language of the Bible. We know the Old Testament is written in Hebrew and the New Testament in Greek with just a few places where Aramaic has been used.

A man called Flinders Petrie discovered an inscription in the Sinai Peninsula, not far from Mount Sinai itself - he dated it about 1,500 BC that is the time when Moses the great leader would have been a youth. This inscription was thought to have been made by Canaanite workers in the mines there. This showed that by the time of Moses an alphabetic consonant script was in use. Ancient Hebrew has no vowels, so when Moses began to record his people’s history he would have used ancient Hebrew which is the language of the Jews.

The final language that we need to know a little about before we move on is Greek. Scholars thought that this was a late language compared to some others but now many are changing their minds and think it is much older than originally thought. The Greeks are the ones who decided on the direction of writing - from left to right - the Romans copied this and that is what we do today.

When Alexander the Great conquered all the known world as far as the Indus river in India, he left garrisons of his men in each country he conquered. They in turn married local girls and had children who grew up speaking Greek. The Greek they spoke was not the classical Greek of the scholars but Common or Koine Greek, and that is amazingly the language of the New Testament. Amazing God had it planned all along.

It was alright having these ancient languages but apart from Greek who could read them? The story of Hieroglyphs and Demotic is fascinating. Napoleon Bonaparte invaded Egypt in 1798 with a vast army and 200 ships. With him were scientists of various disciplines there to investigate the ancient monuments, In 1799 at a town called Rosetta in the Nile delta a stone was found on which were three writings. Hieroglyphs, Demotic and Greek. After Lord Nelson defeated Napoleon at the battle of the Nile the stone was moved to London and is now in the British museum. A man named Thomas Young was the first to attempt to read the stone. The first name he read was Ptolemy and he went on to find more names.

However it was a Frenchman J. F. Champollion who at the age of 11 heard about the stone and was determined to crack the code. He became an expert in Egyptian languages and in 1822 deciphered the text. So it was now possible for Egyptologists  to read the monuments. Because of the Greek text they were able to compare the other two and know they had a correct translation.

So what have learned today? That the so called oral tradition of passing on the Bible message from father to son was so in the very beginning of mankind but very quickly man learned to write and so an accurate account was kept.

God a God of revelation knew that writing was vital to preserving His message to mankind. A message of love, justice, holiness and salvation, all based on God’s great grace.